This is a Solar Tracker. A full size, internet cloud connected, smartphone accessible Solar Tracker built mainly from 2x4s and plywood, employing wooden peg gears, recycled curtain poles, nuts, bolts and threaded rod. The solar tracker uses a home built electronic controller incorporating WiFi, stepper motor drives, accelerometer and magnetometer. The tracker was designed to drive a full size 90W panel in azimuth and elevation. The gears driving the tracker are wooden peg gears commonly used in the 16th century. The gears were designed using modern 3D CAD (Solidworks). Connecting the wooden peg gears to the internet cloud just seemed like the right thing to do. This is not a waterproof design – you will need to consider modifications to waterproof your derivative design.

The project started with a need to automate the irrigation of our raised vegetable garden. The purpose of the vegetable garden is to reclaim some semblance of self reliance on the veggi front. Adding a solar panel allows the vegetable garden to water itself in a self-reliant way. Adding a rain barrel collection system as a water source ramps the self-reliance up further and is an environmentally sound thing to do. 90W is certainly way more power than we need, but I’m sure over time I will find more things to connect. The rain collection system is documented in another Instructable http://www.instructables.com/id/Recycle-Pallet-Rain-Barrel-Stand/. A future instructable will document the irrigation system as time permits.

The need for solar tracking is well documented in the available internet literature and scientific journals so there is no need for me to repeat it here. There are many arguments for and against, but efficiency gains of up to 30% versus static installation make solar tracking attractive. You just need to make sure that your motive power needs are much less than the potential efficiency gain. The additional cost of a tracking solution is added to the overall cost of a solar system which increases the time to a positive ROI. But tracking does not need to be expensive – at least not for the home hobbyist with a small number of solar panels. The tracking accuracy requirements are not that high either. Using a micro-controller to control the tracking made it easy to control the tracking power losses by having the system operate in a low power mode for as long as possible, with only an occasional high power spurt to turn the motors a small amount. There are other ways to do solar tracking (optical sensors connected to simple circuits for example – “light followers”), but microcontrollers create opportunities for feature creep and you will learned a whole lot too. And learning is key.

Here’s a short video to show the completed project in action:

Let’s get started shall we? The major system components identified in the block diagram: 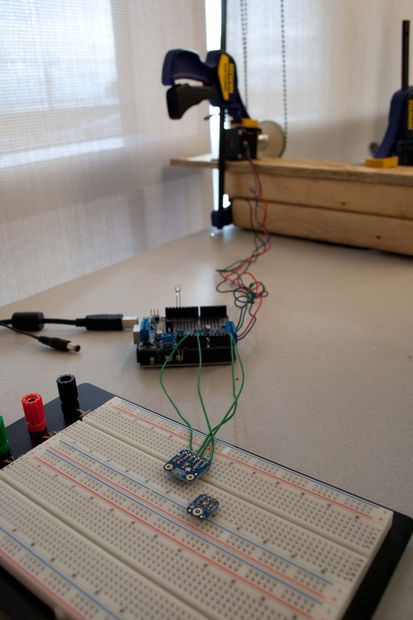